The Canon 60D is here. The long-rumored successor to Canon’s 50D was announced yesterday in London.

The big changes? The Canon 60D body has been redesigned with “enhanced“ ergonomics. Something many shooter have longed for: An articulating LCD has been added. The 3-inch Vari-angle wide LCD features a 3:2 aspect ratio and a 1,040k dot resolution.

The Vari-angle wide LCD helps frame shots from difficult angles, and can be positioned with Live View enabled to achieve the desired composition if shooting isn’t possible using the viewfinder. Shooting from the ground or up high? Rejoice – this LCD will suit your style.

What else does the Canon 60D have under the hood?

The other big news – the Canon 60D is using SD cards as a storage medium. That’s right – that giant stack of CF cards you have sitting on your desk can’t be used in your new Canon 60D. While you can lament this point using SD cards does open an exciting new door. The 60D is compatible with the Eye-Fi system and has built-in menu functionality. Say bye-bye to that expensive Canon WiFi grip.

It looks like a nice upgrade – hopefully the 60D will do better than the 50D, a poor follow-up to the incredibly popular 40D. 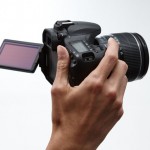 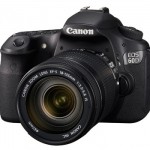 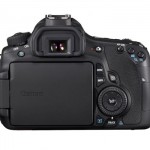 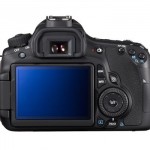 Canon 60D from above 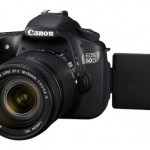