Louis Pang and the Mitros+ for Nikon

We were commissioned by Property Hunter magazine to photograph Stanley, the city planner of Kota Kinabalu which is the largest city of Malaysian Borneo. The idea is to capture a frame that depicts Stanley with the city skyline from a high vantage point.

When we visited the rooftop of a 14-storey hotel prior to the shoot, it was a sunny day. On the actual shoot, we had a rainy morning which gave us very flat lighting. We started with three flashes (2 Mitros+ & 1 Mitros), all in group A, with a shoot through umbrella. It produced a soft light which was lost on the flat ambient light. The picture felt too soft. So I removed the umbrella and the diffuser caps of the flash units, zoomed the flash to 105mm. This yielded a harder and more focused light on Stanley with dramatic fall off–reminds of the effect of beauty dish. The new lighting setup brings the attention to Stanley who stands out from the sky and buildings. The harder light is more masculine and I think compliments Stanley.

Happy to report Mitros+ and the older Mitros with Odin receiver chimed along perfectly with the Odin transmitter in this shoot. There was no misfire. Flash output was consistent.  We opted for small flash in this shoot because they are lighter to transport to the open roof top which had no power supply.

Louis will be taking part in the GPP Pop-up in Singapore in May. Get your tickets now to see Louis with Joe McNally, Greg Heisler and Zack Arias. 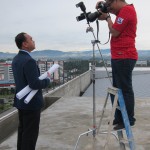 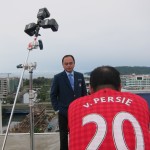 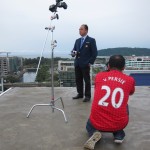