I have a confession to make: when I’m not writing articles for The Cam Critic or working my day job at SmartIntern, I compulsively check Kickstarter listings. I can’t explain why, but the thrill of finding promising new projects keeps drawing me back to the platform.

For those unfamiliar with Kickstarter a quick description will be necessary: Kickstarter is a crowdfunding platform that allows people to raise money for various projects. Each project starts by setting a funding goal. If enough “backers” contribute money to help the project reach its goal of, say, $10,000, then those people will be charged for the amount they committed to donate and the product will go into production. If the project fails to reach its goal, nobody is charged. In this way risk is minimized for both would-be buyers and sellers.

Like the internet as a whole, you need to filter through a lot of noise on Kickstarter to find the real gems. For this article, I decided to do just that, and sift through the good and bad of Kickstarter to bring you five of its best photography-related projects of recent memory.

The Hampton Camera Bag: A Bag For More Than Just Your Camera

The first project that caught our eye is the Hampton camera bag, which aims to combine the look of a modern designer handbag with the functionality needed by the modern photographer. It is the creation of London design house Mooli and is designed for DSLR photographers who prefer an “alternative to the generic polyester bag.” As mentioned, the Mooli is essentially a designer-style handbag for photographers, so any men reading this who are in need of a bag will want to skip to the next pick on our list, the Everyday Messenger. The Hampton is available in black, brown, and red.

Instead of the bulky compartments characteristics of most modern camera bags, the compartments inside the Hampton are created with 4 removable, adjustable dividers, which give it great flexibility. This means you can protect your Phottix Odin II without taking up unnecessary space.

As of September 21st the Hampton has 10 days remaining in its funding cycle and is half way to its $23,000 goal. This would be Mooli’s first production run of any product, so you know that your contribution is going to make a difference.

Like the Hampton, the next product on our list, The Everyday Messenger, is an attempt at re-interpreting the camera bag.

The Everyday Messenger has already reached its funding goal and will soon go into production. To say that they crushed it is an understatement- their original funding goal was $100,000 and they managed to raise almost five million dollars, making it one of the most successful Kickstarter launches of all time.

Like the Hampton featured above, the Everyday Messenger comes with a set of re-arrangable dividers (FlexFold™) that can be customized to organize gear and maximize space.

The Everyday Messenger comes in charcoal and heritage tan.

The Ark: A Virtual Reality Film About The Northern White Rhino

The Ark is a virtual reality film about the world’s last four northern white rhinos, filmed before they go extinct. The filmmakers, Eline Jongsma & Kel O’Neill, are setting out to use 360 degree Virtual Reality film technology to bring viewers to the Rhinos’ last habitats in San Diego, California and Kenya.

Virtual Reality technology uses virtual reality goggles, like the Samsung Gear VR, to immerse viewers in a highly engaged viewing experience. While the VR industry is still in its infancy, the new Oculus Rift (also a Kickstarter project) is set for release in early 2016 and will likely bring VR into the awareness of the everyday consumer.

You can view some raw footage shot with the camera system being used by The Ark’s film-makers here. 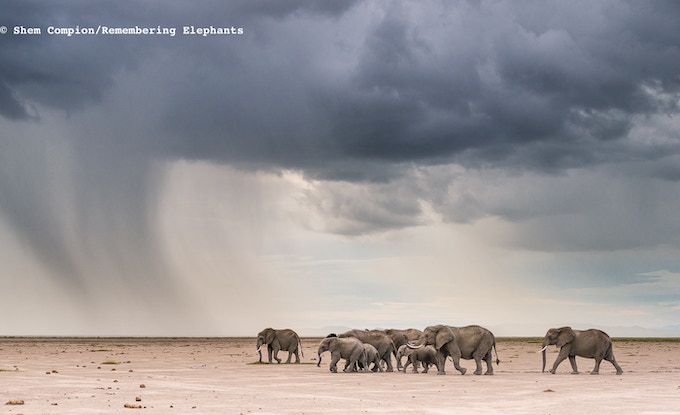 Another conservation-minded project that recently hit its funding goal ($31,388) is Remembering Elephants, which is an elegant hard-cover book that will feature images of elephants captured by some of the world’s most well-known wildlife photographers. The goal of those behind Remember Elephants is to “make the most beautiful book on elephants ever made.”

Each of the dozens of photographers whose work is featured in this hard-cover book are donating one image each, and proceeds gathered from the project will be donated to the Born Free Foundation to fight poaching. It is estimated that between 90 and 100 elephants are killed daily for their ivory.

This creative offer, dubbed Lightbox, is a “photo challenge deck”. What is a photo challenge deck you ask? It’s a 52-card deck full of challenges for photographers, with each card representing a different challenge. For example, you might draw a card prompting you to take a photo of a letter. Or a photo capturing texture. Once you are satisfied that you have completed the challenge, simply pick a new card and begin a new anew. Lightbox already has one successful Kickstarter launch under its belt, and this current version of Lightbox is themed “Macro”. It recently hit its goal of $15,137 and will go into production soon.

This article was submitted by The Cam Critic. Interesting in writing for the Phottix Journal? Drop us a line at media (at) phottix.com